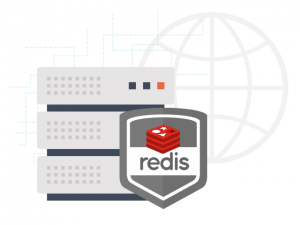 Databases lie at the heart of web development. For this reason, they need to evolve in order to meet the needs of any website or application.

In recent years, multi-purpose solutions, such as Redis, have emerged to offer a brand new, complex perspective on database management.

By combining in-memory design with optimized data structures and various modules, Redis gives site owners much more flexibility when it comes to managing their content.

Redis, which stands for REmote DIctionary Server, started as a VMware-sponsored project back in March 2010.

According to DB-Engines.com’s monthly charts, Redis is one of the most popular key-value stores on the web.

Also, it occupies the 4th position on the NoSQL database users’ satisfaction chart and ranks among the Top 50 Developer Tools & Services.

The key advantages of the Redis database storage system

Redis represents a real innovation in the world of structured storage systems. Here are a few innovative characteristics that have helped it outjump all other popular key-value stores:

Redis allows data to be processed at the database level rather than at the application level.

In contrast to other key-value stores, Redis allows applications to carry out complex tasks such as computing set intersections or range analyses using simple commands.

Based on the C language, Redis is optimized for execution with O (1) complexity.

In contrast to standard storage systems, which write every change to disk, Redis normally holds the whole dataset in memory.

Its in-memory nature allows it to provide the highest throughput (millions of operations per second) at the lowest possible latency level (< 1ms), which translates into more efficient hardware utilization.

Setup costs, on the other hand, can be reduced by means of connection pooling.

Thanks to the available add-ons and extensions, Redis can serve multiple data processing purposes – from querying secondary indexes to serving machine learning models. 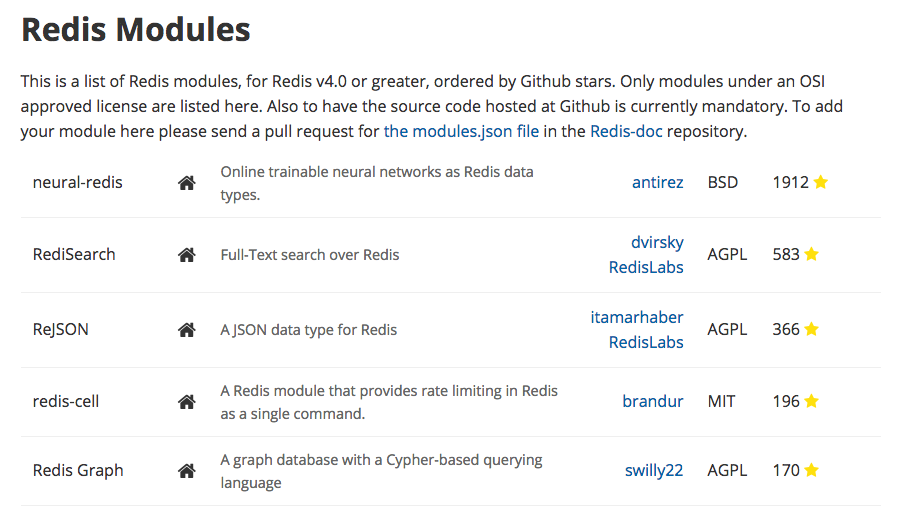 Developers can select from a variety of Redis Modules instead of having to maintain and operate specialty databases for specific processing needs.

Redis usually keeps the entire dataset in memory. For persistence to be achieved, the dataset needs to be transferred from memory to disk from time to time.

Depending on the particular case, this can be done in two different ways:

Since Redis writes data to a file system at 2-second intervals, only a few seconds of data will be forfeited in the event of a complete system failure.

Master-slave replication enables data from a master Redis server to be copied to any number of slave Redis servers, which in turn can become ‘masters’ to other ‘slaves’.

This allows for the implementation of a single-rooted replication tree.

Thanks to the Publish/Subscribe feature, a client of a slave may subscribe to a channel at any particular point and receive a full feed of messages published to the master.

Here is a list of the abstract data types supported by Redis:

Redis can be employed for many practical purposes. Here is a list of the most common uses of Redis:

How to make use of Redis on our web hosting platform?

You can find Redis in the Advanced section of the Web Hosting Control Panel:

To enable Redis for a given project, you will need to create an instance first.

In the Redis section, click on the ‘Create a new instance’ button in the top-right corner and then hit the ‘Add’ button in the popup window that comes up: 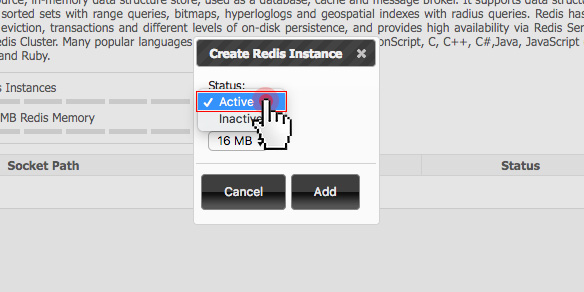 Once the instance has been created, you will see it listed in the table below:

You will see the socket path and will have an option to add memory, or restart the instance, etc.

Redis is included by default with the Corporate and Enterprise web hosting plans and is available as an upgrade with the Starter, Business and custom-made packages.

Also, Redis comes with all semi-dedicated and dedicated servers as well as with the whole range of OpenVZ VPS packages.

The FFmpeg application for video/audio conversion installed on our servers
httpoxy - a CGI application vulnerability now under control on our servers
A case study: how to make an older SSI code work with the latest Apache version